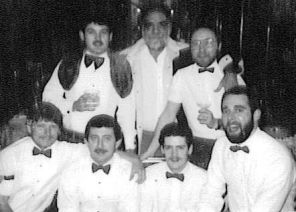 Introduction: The Founder Of George's Place

George Hogan was a well-liked community leader who resolved to fulfill the city's need for a nice place for gay people to meet and socialize.  He was the Director of the Baton Rouge Cancer Society.  After retirement, he began looking for a location close to downtown to open his bar.

The Location
George's Place was established in 1970 when George found the perfect location just across the street from the historic Pastime Lounge, a long-time hangout for LSU students and alumni.  George also took up residence in a house right next door in what is now George's parking lot.

In the beginning, the building had no sign and an enclosed courtyard.  This allowed for patrons to come and go discreetly.  In those days, the bar interior was also kept dimly lit.  However, George's quickly became known as a very friendly place to meet friends and have a drink after work in the downtown area.  In no time, the bar was a very popular place, and its growth has increased every year since.

The Community & The Owner
George's Place was a cozy hideaway for both openly gay and closeted individuals.  Even those who those were closeted and afraid to be seen or perceived as anything but straight felt comfortable and welcome at George's Place.

George himself spent most of his time going between the bar and his home next door.  In fact, he never left the properties.  His friends did his shopping and ran errands for things he needed.  Eventually George became somewhat of a recluse.

In 1987, George Hogan passed away from lung cancer.  The bar was inherited by his straight brother, Walter Hogan, who lived in Metairie.

How a Bartender Became The Owner

George Hogan hired Richard Dykes to tend bar in the late 1970's.  Richard was a sexy Navy man who was raised as a country boy  on a dairy farm in Montpelier, Louisiana.  George quickly promoted Richard to manager; he could see that Richard was ready to make his mark on the world.

After George passed away, Richard offered to buy George's.  Richard continued to manage the bar and kept it running smoothly until he actually became the owner in March of 1988.

Changing With The Times
Aesthetically and structurally, George's Place is a lot different now.  Richard added a small performing stage in the early 1980's and has since remodeled the entire building.  Richard hired a local artist, Kellie Austin, to paint faux murals inside and out.  She has created a charm never before seen in this location. 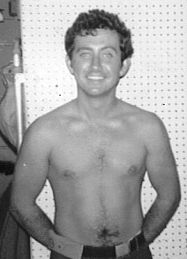 George's has always supported the local Baton Rouge gay community in every way possible,  whether it be giving fundraisers for the fight against AIDS or support of the local  gay Mardi Gras Krewes.

Richard and Guy Schmieder, his life partner of nearly 30 years, are still involved with the business.  Richard enjoys being the door greeter.  Together they are always on hand to help show appreciation for continued patronage. With a friendly staff to mix and serve drinks, the bar only gets better with time.  It is a fun place to hang out, a place to make new friends, and spend time with the friends you already have.  George's Place offers something none of the other gay bars has: a retreat from the typical gay scene.  Its cozy atmosphere continues to attract locals, visitors to the city, and our open-minded gay-friendly family.

George's Place Today
Richard continues to increase the growth of the business.  Chansley Dykes, Richard's lesbian niece and graduate of Southeastern Louisiana University, became a bartender at George's Place.  Along with tending bar, she helped her uncle run the day to day operations of George's Place.  Both Richard and Chansley worked to make improvements to the bar and increased clientele.  Chansley is well liked by men and women alike, fits right in.  Chansley was promoted to manager in 2005.

In 2007 Richard decided to slow down and enjoy the business he built.  He recently promoted Luther Sobers, one of his top-notch bartenders, to assistant manager.

Together, Chansley and Luther make a great team and continue to carry on the traditions began 38 years ago.  Excellence has always been a standard for this entertainment emporium - from male dancers, to fabulous drag shows, to the best karaoke nights in town.  It is the "In Place" to be.

What more could you ask for?  It is, and always will be,"the place with the personal touch".  George's Place is a proven winner.  Stop in to see us, and you will understand why.